Musing With My Mouth Full 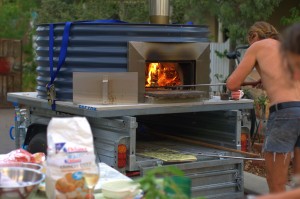 As I sit down to write this I’m chewing on a delicious slice of sourdough bread, still warm having been pulled from the oven just minutes ago. Mmmmm, so am I going to talk about sourdough and recipes?

The oven the bread was cooked in is a mobile pizza oven that I finished putting together a couple of weeks ago.  I’m pretty proud of it (don’t you love it when a plan comes together?).  So am I going to talk about building pizza ovens?

Well, sort of ….but not really.

Yes, no, recipes, building, sort of , pizza ovens, not really…. What’s this all about?

I guess what I want to talk about is how a piece of commonly owned infrastructure (in this case, a mobile pizza oven ) can be part of the recipe for building a strong community. 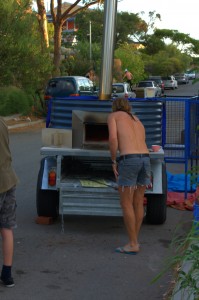 This story begins a couple of years ago when a friend of mine decided to hold his wedding at our Eco B and B, The Painted Fish. The wedding was really beautiful (and deserves another story all of its own), but all that sloppy romance stuff aside, the thing that really struck me was the way in which a large number of wedding guests were fed. My mate, Wade, hired a mobile pizza oven from a local manufacturer and set it up in the driveway of The Painted Fish. The oven arrived still hot from the previous gig so my partner, Shani, never one to waste an opportunity, popped in a tray of our freshly harvested potatoes and we had baked potatoes for dinner. The next day I helped out, whipping up pizzas for the throngs of wedding guests. It was so quick and easy once I got the hang of it.  I ended up feeding half the neighbourhood kids as they wandered past on the way to the beach.

The next morning the oven was still hot, so Wade used the last of the pizza dough to make up some breakfast damper and Shani cooked up a load of roast beetroot. So much food with so little effort.  It really got me thinking; “Hey, why don’t we make our own?”  On the other hand, how often would we really use it?  Probably not often enough to justify taking up some of the near-200 square metres that we live on. Then, on the other hand (how many “other hands” is a Libran allowed?), what if we made it mobile and got everyone in the street to chip in to pay for it?  I asked around and to their credit about half the people in the street put in $100 and I went shopping.

As it turned out I had underestimated the cost so the idea went on the back-burner awaiting the right moment to boil over into action. . . . .

Then, in 2010 a remarkable thing happened. Our annual Hulbert Street Sustainability Fiesta ran at a profit (a surprising and fortuitous accident). What should we do with the left over money? Hey, why don’t we build a mobile pizza oven? During the fairly chaotic discussion that followed it emerged that there was a strong feeling that at least some of the money should be given to a local community group in need of funds for a worthy project. I suggested that maybe we were a local community group in need of funds for a worthy project and, in addition, I figured that if we built the mobile oven then we could lend it out to other similar groups to raise funds for their own projects (for example, during the 2010 Fiesta a group of Hulbert Street residents hired a pizza oven and sold enough pizzas to raise $1000 to help fund the Fiesta).  Somewhere there’s a saying “Give a man a fish and feed him for a day, teach a man to make pizzas and he can raise enough funds to pay for his own fish”.

So now we have a street-owned mobile pizza oven. 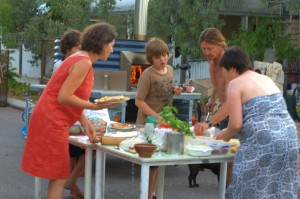 People are now drawn together through the sharing of food and fire, two elements that serve as powerful social adhesives due to our common history as cave dwellers (well, at least that’s what I think).  For the past year one of our neighbours, Sean, has been hosting an open invitation afternoon tea on Wednesday afternoons. Since the pizza oven has been available people have started bringing toppings and dough and afternoon tea has morphed into dinner, feeding half of the street and anyone who happens to be passing by.

These weekly pizza fests provide an excellent opportunity for the sharing and showing off of homegrown produce. Last Wednesday we used tomato sauce (made with homegrown tomatoes, onion, garlic, herbs etc cooked earlier that day in our solar oven), olives (grown by our neighbours and pickled by us using a recipe from another neighbour), cheese (made by our visiting friend Nunzio), herbs (from the Hulbert Street Guerrilla Garden and the verge gardens) and smoked trout (raised in my aquaponics tanks and smoked by a nearby mate Jeremy). Yum!