We bought our new home at 16 Livingstone Street Beaconsfield in April 2013. The 1970’s Italianate house sits on a quarter acre surrounded by subdivided blocks – the norm around here is to bulldoze the house, and build two big houses. There was not a single green thing (except for cooch) as the block had been cleared for subdivision.

We wanted to try something different . . .

Housing.
Our basic goal is to provide smaller living units for people, housing as many people here as if we had subdivided the block and built two big houses. Given the average new home size in Australia is 243 square meters and the average space taken up by each person is 91 square metres, we aimed for much less than that. We now have five separate living spaces, all with independent living, dining and bedroom areas as well as bathrooms and kitchens. The units share a laundry and there is also a separate communal kitchen and dining area. All these units have Noongar names. 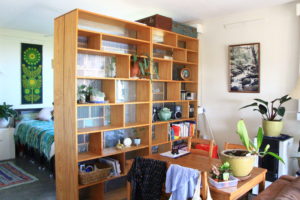 Warden (ocean) has been created by removing the walls between two bedrooms and a hallway. It is a single room studio apartment. Moveable book cases and wardrobes mean the space is flexible. A special bed with plastic storage tubs on wheels underneath, plus a well-designed kitchen located in the previous hallway mean the 37 square metre space works well. 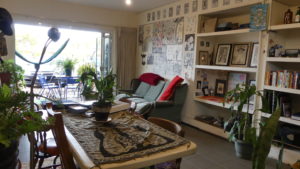 Ngardak (underneath) has been created by dividing the triple garage space into a one bedroom apartment. Moveable soundproof walls separate the living space from Tim’s workshop next door and this, plus the installation of a commercial kitchen allows for the possibility of using the space as a classroom in the future. A funky semicircular shaped bathroom dug into the limestone cap rock is a feature of this 45 square metre apartment. 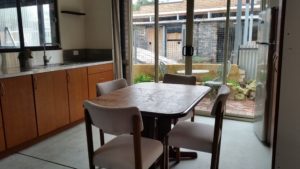 Boodjar (earth) has been created from an outside workshop and store room. The room is 34 square metres and has a small kitchenette, indoor bathroom and outdoor shower. An 18 square metre insulated waterproof undercover area extends the useable space. The unit maximises northern light with large sliding doors opening directly onto the goat and chicken pen.

Nyit (little) is our newest building project. This tiny 16 square metre dwelling with a loft bed and storage area was completed as part of a Steiner school student’s year 12 project. Britta studied females in trades and most of the tradies that worked on the project were female. This accommodation is for a permanent live in volunteer, who exchanges daily work in the garden and property instead of paying rent. 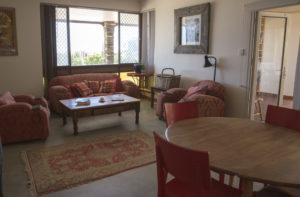 Koolark (home) is our place, and consists of an 18 square metre bedroom and clothes storage area, a small bathroom and a 51 square meter office, kitchen, dining and living space. Koolark is in the middle of the house but the clever removal of roof space and the installation of a solar pergola with grapevines allows northern light to penetrate onto the concrete slab in winter. 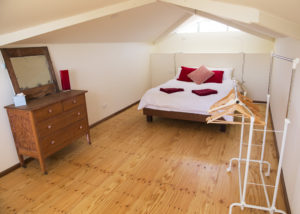 Moortung (extended family) is the common shared area of the house, consisting of the front verhandah, side kitchen and dining area (66 square metres), small storage area and laundry (with shower, toilet and composting dunny). A full height loft provides a space for short term visitors – from visiting musicians to helpx volunteers. This room is called moortung nookat (where extended family sleep) 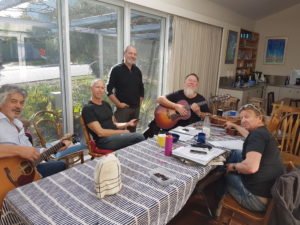 The main room in this shared area faces north with 6 meters of sliding doors and a large pergola with grapevines mean there is good northern light and heat control.

Because the house is facing west summer sunsets mean it gets hot! Treatments on the east of the house included the removal of one large eastern window, replacing it with triple aircell insulation and a passion fruit vine growing on a mesh screen about 10 cm from the wall. On the west there is an extended verhandah providing additional shade for both warden and ngardak, grape vines and Virginia creepers and pull down shade. 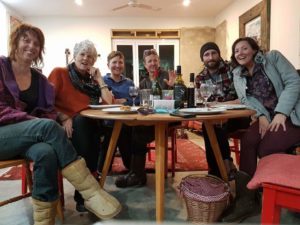 Community
The small community that has been created here is one of the highlights for us. The residents at Ecoburbia would not normally live in the way they do. Our initial residents were two people in their 20’s, one in their 30s, one in their 40s and one in their 50s. Meals are often shared with a “houseling” dinner every Sunday. Everyone is welcome to the 11am cup of tea and 1.30pm lunch break. We often laugh that it is somewhere between Melrose Place and Seinfeld with an alternative shared kitchen. Visitors comment on the casual nature of the community relationships, but it seems to work really well. 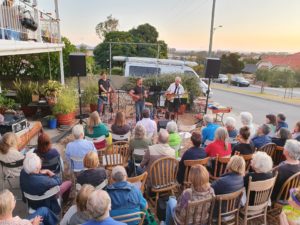 Ecoburbia continues to run its monthly movies, but we now have a purpose built outdoor movie area created from the tiered front garden. Each summer we hold 3-4 house concerts. The Freo Living Smarties meet in moortung once a month, the local precinct group uses the space for meetings and we usually have a weekly yoga class. Four times a year we hold a tour. 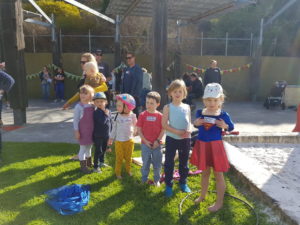 We also have wider community involvement, from sharewaste visitors bringing scraps for the compost to folk borrowing boomerang bunting. We are very active in a geographic community group- the West Beacy Bunch. This informal community group is focussed on the 300 houses around where we live. This group organises pot luck meals, guerrilla plantings, olive oil pressing, Living Smart courses and other events that mean neighbours meet each other. Nearly half of the 350 odd houses in the West Beacy Bunch area are on a community email list! 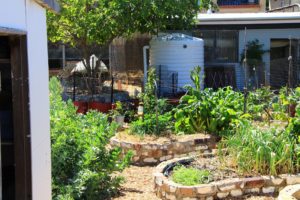 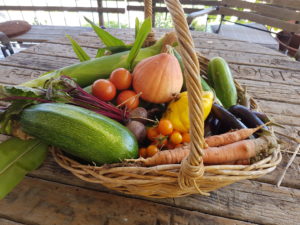 Food Production By organising smaller housing units, we have about 223 square metres left for garden. The front garden is planted with a “help yourself” herb garden that is shared with the household and other neighbours. The back garden has six 7 meter by 1.2 metre curved beds for more intensive plantings – from carrots to corn, cauliflower to silverbeet and everything in between. We estimate 90% of our veggies come from the garden in summer and about 50% in winter.

Six citrus trees have been planted on the southern boundary. Because of the limestone caprock they are in large pots - soak well liners. Four deciduous trees (mulberry, apple and two plums) are will be planted in the goat pen. An advanced macadamia was saved from a developer and planted outside ngardak. 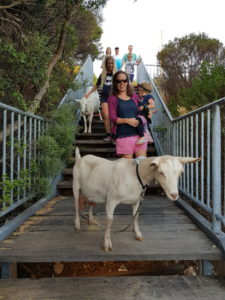 Our two goats (Whimsy and Little White) share their 48 square metre pen with 12 chickens, and provide us with enough milk for our needs, the making of goat’s cheese and some trading of milk. Other “non residential woofers” trade milking skills for goat’s milk. 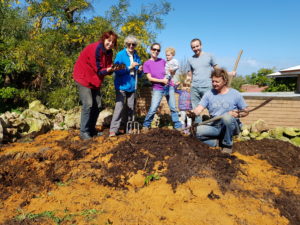 On our northern verge a pile of limestone caprock has been used to create four swales, and after dumping four years’ worth of mulch there the soil has gradually improved. This verge is mostly planted in native goat fodder (mostly acacia). There is also space for two other families to garden – the smallest community garden in Australia!

Water All residents at Ecoburbia share one large laundry. The plumbing in the main house and boodjar all runs through one conduit, meaning shower and laundry grey water is easy to control. The greywater pit is on the bottom corner of the property and our pump system ensures all the fruit and nut trees are well watered.

We have installed a bore (35 metres down) which services the toilets, laundry and the gardens. This bore water is first pumped into a tank before distribution. 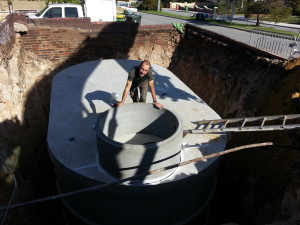 The rainwater system proved to be a major project. We installed a 50,000 litre concrete rainwater tank underground at the front of the block (no mean feat when the heavy machinery had to dig into caprock). There is a smaller 8000 litre rainwater at boodjar for water emergencies and for drinking water when the big tank runs out in summer. 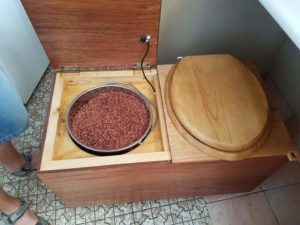 We have a shared composting toilet in the laundry area. This simple bucket system is available for anyone to use. The buckets are composted in large wheelie bins for a year, then further hot composted for 6 months.

Tim estimates that with five people living here, with a daily water use of 50 litres, we should be able to survive 100 days with no rain, essentially taking us “off the grid” in a typical summer. (this has yet to happen)

Power The main house has had a large 7.5 kilowatt solar array installed. Although we only have a 5 kilowatt 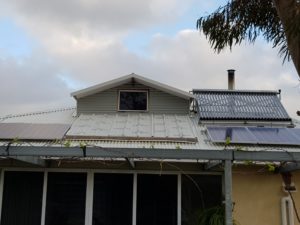 inverter (the maximum allowed) by facing panels on the east, north and west we have a smoother production pattern over the day, and it is rare for over the maximum five kilowatts to be produced at any given point in time.
Two evaporative tube hot water systems serve the needs of the main house and boodjar, with only occasional electric back up heating.

The living spaces with northern aspect do not really need heating, but south facing warden and ngardak have both had wood fired pellet heaters installed. These heaters are common in Europe and use waste or sustainable sourced wood pellets. These heaters use a reduced fuel flow rather than oxygen flow, and burn with a 98 % efficiency, without producing carbon monoxides, sulphur dioxide or particulate pollution.

Koolark has a modern wood burning stove with stove top and oven that is used for cooking and heating in winter. By collecting scrap wood around the neighbourhood we do not have to purchase fuel. 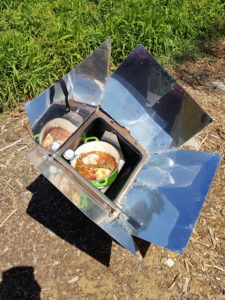 Low tech power saving initiatives include solar ovens, cookers and food driers available for residents’ use. There are no televisions and one computer modem services all residents. In the future a battery bank will ensure the house is “off grid”. 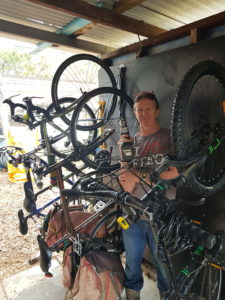 Transport Most Ecoburbia residents use bikes for their daily transport and there are not enough car parking bays for the residents here!

We have electric bikes, an extra cycle cargo bike and various commuter bikes for residents and short term visitors. Our new bike shed means we are able to store all our bikes efficiently.

Financial Sustainability We recognise that high and medium density housing, close to good public transport options is a more sustainable way to live, especially if small houses, fewer parking bays and communal sharing of resources mean that more land can be used for urban farming. 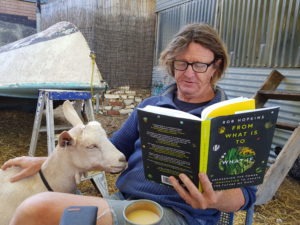 But that is not the only reason for having rental accommodation on our property - we are realistic about our financial sustainability as well. We hope that once Ecoburbia is fully established the income from renting the various accommodations, coupled with our reducing living costs, will enable us to spend less time worrying about income and more time doing the sustainability work we love doing in our community. We are looking forward to being able to more fully integrate our home and “work”. We like the idea of retirement being the freedom to do whatever work we like without having to worry about the money involved. We want to be able to age in place.

In summary . . . . . Sometimes we are asked for brief summary about what we are up to here. We usually say something like “It’s a bit like a combination community garden/ housing cooperative.” The main difference however, is rather than an intentional community being run by a committee with long meetings and consensus decision making, Ecoburbia is run by benevolent dictatorship. (even if there is sometimes disagreement who that is!) 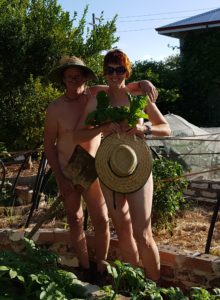 To keep up to date with how this project is going, like us on facebook or join our email 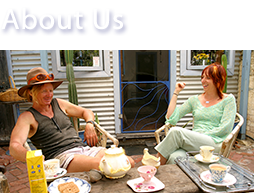 Shimtani – Our home on Hulbert Street 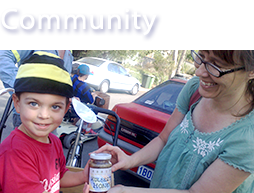 In the Past - The Hulbert Street Sustainability Fiesta 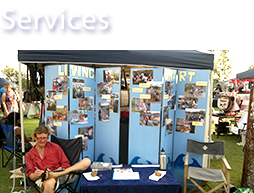 Tim the Artist and Musician