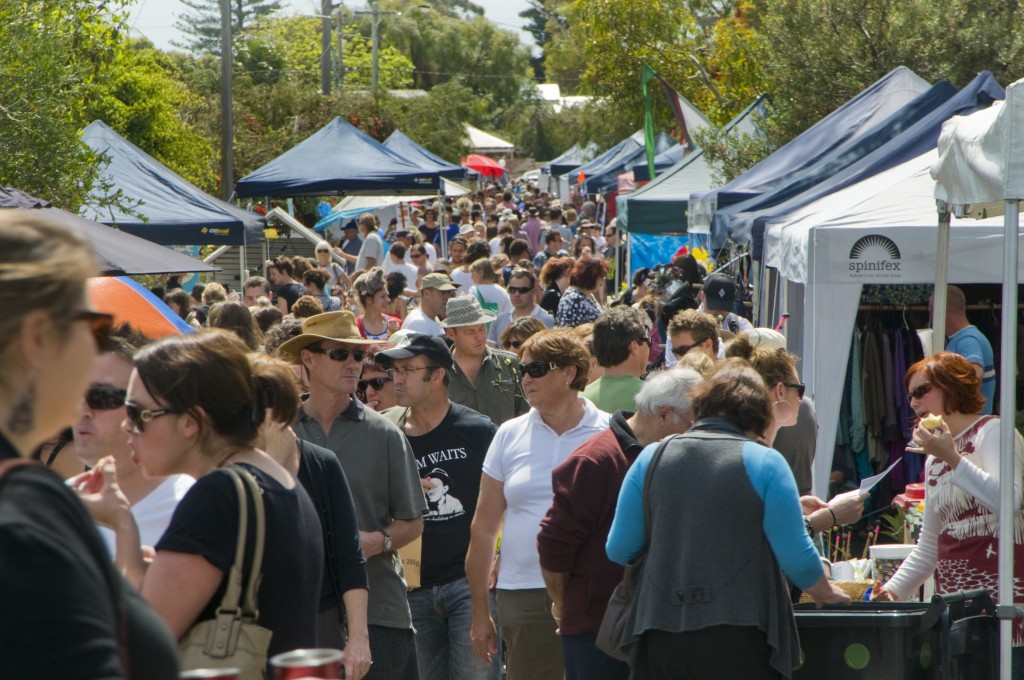 For five years from 2008 to 2012 Hulbert Street, a local street in South Fremantle hosted a Spring Sustainability Fiesta. Two homes, five artist's studios and six gardens were open to the public and and in 2012 over 7500 visitors enjoyed the weekend.

The vision behind the Fiesta was one of celebration and inspiration, allowing people and local community groups to celebrate and share sustainable changes they have made, and inspire others  to take on a more sustainable lifestyle. The Fiesta provided an "open space" for individuals and groups passionate about sustainability to share. The focus of the Fiesta was on creating and showing a positive vision for our future society by sharing and celebrating what had been done in Hulbert Street. There was a  focus on "hands on" things that people can do in their own homes in the hope that they will leave inspired to make sustainable changes in their own lives

Sustainability and community are an important aspect of life on Hulbert Street, with 43% of residents having completed a Living Smart course, over 50% of owner occupied homes being connected to their own solar power, 67% of households growing some of their own food and regular street movies, shared community meals, gardening days and courses ensuring people in the street are well connected and in a perfect situation to host the Fiesta.

Hulbert Street was closed to traffic for the weekend of the Fiesta, with residents volunteering to ensure all cars are off the road so space is available for stalls and activities. All 32 households and 70 residents helped with the Fiesta in some way.

In addition to these residents, about 180 volunteers assisted in the coordination of the Fiesta, 205 people voluntarily representing about 30 community groups at stalls, with over 150 people volunteering to speak or busk.

In 2012 70 food, artist and sustainable product stalls added to the colour and energy of the Fiesta. Each year stall applications were carefully considered to ensure they encourage the meeting of the goals of the event. We found this blend of stalls gave the Fiesta a very “local homegrown” feel.

During the Fiesta several Living Smart "Show and Tell" Tents were set up to allow different groups and individuals to share ideas, skills and information informally. Topics ranged from worm farming to preserving, ginger beer making to bike maintenance. A Show and Tell timetable was advertised in the local paper, on large boards at the street entrances and on a flier handed to participants as they enter the street. Those interested were encouraged to participate in a local “Living Smart” course by past participants and facilitators.

Local Hulbert Street residents also showcased their homes, creativity, work and sustainable lifestyles. The Painted Fish (37 Hulbert Street)  and Shimtani (21 Hulbert Street) were open and informative signage enabled visitors to wander and learn at their leisure. Other gardens in the street were open to members of the public, including a native water wise garden and several showing different styles of food production. There are seven practising artists living in Hulbert Street, and most held open studios over the weekend.

Other householders took part in a Living Smart Poster Project where they share what they have done in the past twelve months to make their homes and lifestyles more sustainable and what their future plans are.

As well as open homes, gardens, studios and stalls, there was always a great deal for people to see and do over the weekend. Cafe style seating was set up near the Buskers’ Spot and Show and Tell Tent to allow participants to sit and enjoy the entertainment  and allow the informal sharing of information and food – an important part of “growing community”.

Other family focussed activities  included a woodwork area, basket weaving, a refashioning  and remaking area, skate ramp, a fairy garden to explore, and goats and other animals to say hello to.

In 2011 the focus for organisers was on “resource recovery”. Several washing up stations reduced the need for take away drink containers, and all food plates were compostable. That year the Fiesta amazingly produced only six bins of recyclable material, with all compostable waste dealt with on site in street compost bays.

In 2012 our  Sustainable Transport Project  encouraged visitors to leave their cars at home and walk, ride or catch public transport to the Fiesta. Bike riders were greeted with a red carpet and "valet bike parking". This doubled the number of people who rode to the event.

In 2012 Hulbert Street also hosted the first ever Hulbert Street Preserving Competition and we were amazed with the number of Fremantle residents who provided samples of jams, jellies, cordials, relishes, pickled vegetables, canned fruit and honey.  A preserves display brought a "country show" feel to the sharing of these old skills that are becoming more popular.

The Fiesta had two main goals – to inspire people to adopt more sustainable practises in their daily lives, and to celebrate and reward the changes people have already made. A short report was produced each year evaluating the event, and making recommendations for the future.

Data for this report was collected by counting event attendance, how people travelled to the event, where people came from, analysising budget reports, and post Fiesta surveys of street residents and volunteer coordinators. Data is also collated relating to the number of volunteers involved in the Fiesta and the hours of time donated.

Each year a different evaluation strategy was used to collect information about the success of the Fiesta and its impact on people's sustainable behaviours. After the 2010 Sustainability Fiesta a formal independent evaluation of the Fiesta was undertaken, against the key performance indicators including service quality, change in participant knowledge levels, change in participant behavioural intentions, and execution of participant actions. In summary it found:

For every 100 people taking part in the Fiesta there were 95 new Sustainability things they definitely wanted to do.  That’s 4,750 new ideas for a better planet and community.  The ideas included everything from buying organic food or keeping chooks to double glazing the house or digging up the lawn.

From a list of simple sustainable actions more than half reported that they already have a water efficient shower, waterwise garden, compost and the like.  The big win for the Fiesta is that almost a quarter of people were eager to start doing these things and to be part of the eco-trend.

In the surveys six weeks, and again six months after, the Fiesta more than 6 out of 10 people reported completing at least one new Sustainability action.  This shows that when people get inspired by seeing, hearing about or trying new things they are as good as their word to get it done – people are just amazing.

One of the reasons why people at the Fiesta made so many eco-changes is that they came to the event with a positive attitude: a whopping 98% agree that “it’s my responsibility to leave the environment better than I found it” and 97% felt that “when the community acts together we can make a difference”.

During 2011 a "Tell Us Your Sustainable Story" filming area was set up, and a short film produced containing people's reactions to and stories from the Fiesta. This provided some qualitative "depth" to the data collected the year before. This film was screened recently on Hulbert Street and is available at https://vimeo.com/36822787

In 2011 a detailed analysis of the amount of “in kind” support at the Fiesta was undertaken. It was found that 180 volunteers donated $31,825.00 of in kind support, 205 people from 31 community groups donated $16,940 of in kind support and 181 people shared at the Show and Tell and Busking areas.

The Future of the Fiesta

Partly because Tim and Shani have left Hulbert Street, there are no plans for similar Fiestas in the future, but we are really happy to chat to anyone who  would like to organise a similar event - we have learnt alot over those years!