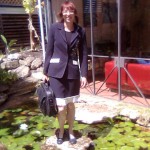 Once upon a time I used to be a school principal. I first became a principal in an era of devolved responsibility to schools, and my favourite boss used to constantly say “You know what needs to be done – just do it. Beg me for forgiveness later, don’t waste your time with permission now”.

Later I worked in our local education district office, as a manager of operations. I often would find myself saying “are you officially asking me permission to do that?, hoping people would get the message that while we couldn’t officially say yes it sounded like a great idea! It was a salient lesson in working with bureaucracy, who often want to say yes but just can’t.

Once you get into growing food in your backyard, most people run out of space quite quickly, and you find yourself eyeing off neighbours’ yards, verges and nearby parks. A morning walk leads to new thoughts of “gee that gets good northern light – wonder how I could get water to it?”. 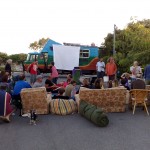 It only takes a movie like “The Power of Community” about the Cuban peoples’ response to their own oil crisis in the form of urban agriculture; soon you find yourself googling “guerrilla gardening” and  . . . . 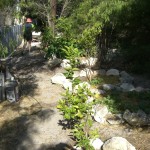 Our first attempt at guerrilla gardening found us using a space between our property and the walkway down to the beach. It was well screened with native scrub so we thought no one would notice. We used this area to plant fruit trees, a few vege beds and hide our five bay composting system.

A fellow gardener (who actually knows what she is doing!) used to walk past with her dog every day – “looks a bit shady there, it will be interesting to see how you go”. 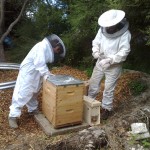 Two years later she very generously is not saying “I told you so” as we replant the fruit trees onto a sunny verge and replace them with shade loving coastal indigenous plants for greater biodiversity and establish a street bee hive behind the coastal tea trees.

Our second attempt was really an experiment to win an argument. With a spare section of water tank Shani planted up some winter veges on a very exposed part of the walkway and bucketed water to them on the odd day they needed it over winter. 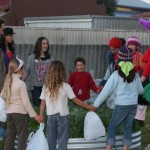 “You can’t plant there – people will steal the tank and take the veges” said Tim. Funnily enough nobody did, and in fact months later we discovered one lady stopped every day for a bit of weeding and to pick off the caterpillars! The highlight of our Street Fiesta in 2008 was harvesting that small garden and distributing the bounty. 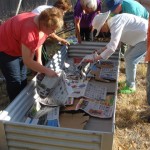 So this year work on our Hulbert Street Living Smarties Garden began in earnest. In autumn people attending a Living Smarties course we were running provided the people power and motivation and we created four beds made from old tin –  creating two as no dig beds and bought organic vege mix from the great Green Life Soil Company for the other two. Two round beds for potatoes were added a while later and each time we run a Living Smart course we expand the number of beds. Now we have a total of 10 garden beds or about 25 square metres of garden . 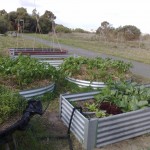 But what about water? – Anna’s place is the closest house to the garden. Anna is now 84 and while her husband was a keen gardener his death 16 years ago has meant there is not much action in her backyard recently. She has generously allowed us to hook up a watering system to her outside tap so that no more bucketing is needed, and we are looking forward to watering her husband’s grapevines this summer (yup they are still surviving after 16 years with no water!) 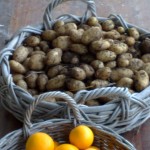 More than a hundred people walk past the garden with their dogs, bikes or kids on the way to the beach every day. If we are working there they always stop and say hello. Generally the response goes like this  – “Wow this is fantastic, so inspirational, good on you for doing this, I love checking this garden out every day . . . . ” 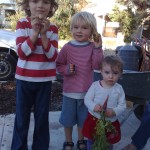 Last week a lady told me about the garden she had established at home inspired by our efforts – it made my day.  In fact when I am feeling a bit down I often head up to the garden for a potter and chat with whoever is going past.

Sometimes people ask “is it your garden?”

“Well sort of” I usually reply, “ but Jet and Banjo helped me plant those carrots, Ronan has been helping with the potato harvest, Jenny helps weed when she can, and Karin is keen to start her own bed up here soon . . .  you can join in if you like. I usually try and find some local kids to help out when I’m planting or doing fun stuff”

People usually follow quickly with the same question Tim worried about – “but won’t people steal it?”

“Well it hasn’t happened yet” I reply, “unless you count Ellie and Zoe whose mum lets them have a snow pea or two every day in exchange for finding snails, or my mum Joy who gets all her greens from here in exchange for worm wee, or the horse who ate half a cabbage before its rider could stop it . . . .. But see those herb beds – there is marjoram, oregano, thyme, basil and coriander – help yourself! Rebecca comes up from Hickory Street every day but she tells me they need to be picked more often”

As they wander off some people pause before asking a final question “Did you have trouble getting permission from the council?”

I read an article recently where the author asked Michael Mobbs the same thing about the verge gardens on Mrytle Street Chippendale in Sydney where his famous sustainable house is. I love his reply so I’ll quote directly from the article –

“When I asked Mobbs if he had received council approval for his innovations on public space on Myrtle Street he replies, “not quite”.
“The local authority, Sydney City Council, has an ambivalent attitude. It is on his side but it is also a bureaucracy operating under the morass of laws and regulations that sits like an oppressive weight on innovation in society. Says Mobbs: “It’s all been done with the delicious sense of doing something without approval.” “

Yesterday I had a call from a Community Gardening Group trying to organise a tour of local community gardens. After a chat about what we were doing here and whether it was classed as a community garden (they are coming to see it whatever it is!) I asked the lady how she heard about us.

“Oh” she said “I called your local council to see if there were any community gardens in this area. Someone suggested I call you.”

She paused  “Actually when we visit can you talk about the process you went through to get permission for the garden?”

I smiled – “Oh we begged for forgiveness, we didn’t ask for permission.”