Machinations on the Mundabidi (by Tim) 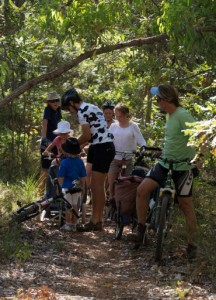 You know that saying, chalk and cheese?  It’s pretty evocative eh?  One smooth and creamy, slipping down your throat with a tasty tang, the other dry, crunchy and tasteless.  You can almost feel the spit drying up in your mouth.

Let’s try another word association ‘Mountain biking’ and ‘kids’.  Does it do the same thing for you?  Mountain biking; mud, blood, speed, wilderness, adrenalin.  Kids?  Soft, fragile, needy, crying.  Now I’m not trying to suggest that kids are “dry, crunchy and tasteless” rather that, at first glance anyway, they’re incompatible with the rigours of mountain bike riding.

I was talking about the kid/mountain bike dichotomy with a friend, Sarah. Sarah had recently returned from an epic two year mountain-bike tour (from Alaska to Chile) with her partner, Tom. When we were chatting Sarah was six months pregnant and was starting to get a bit worried that child birth, and indeed parenthood was going to curtail her opportunities to go mountain biking. After all even the most gadget laden bikes don’t have braise-ons for a baby.

As a deliberately childless person, I could empathise with her – see “The Snip”:A song about vasectomy with accompanying percussion on garden shears. On more than one occasion I have had the sad experience of seeing friends who were once ready to go riding (or walking or climbing or paddling) at the last minute drop of a hat, disappear into a whirling vortex of nappy-rash treatments, sleep deprivation  and after school care.

Fortunately over the last few years I have made a couple of friends who contradict the theory that more kids necessarily equals less adventures.

Meet Ben and Britta. At ages three and six respectively Ben and Britta moved into my street and into my life, introducing me to the joys of other people’s children.  From the time Ben was three he was belting down the street on his tiny little bike, flying over a home-made ramp, falling off, crying for about thirty seconds and then jumping back on again. His sister Britta mastered manoeuvring the street cargo bike before her little legs could bridge the gap between seat and pedals (much to the embarrassment of less agile adults).

Another mate, Greg, a very keen mountain biker, is also the primary carer for two small girls – Meg, aged five and only recently off trainer wheels, and Molly, somewhere between trainer wheels and a pram.  His girls see bikes as the most normal (and preferred) form of transport – either on their own bikes or strapped onto the back of Greg’s pushy.

Then of course there’s Tom and Sarah and their embryonic child.

In order to bring this group of people together and answer (or at least ponder) questions about the compatibility of children with gravel tracks, I invited them to join in on an overnighter on the Mundabidi Trail.  We chose a section of the track between Jarrahdale and the Wungong Site via the Balmoral P.O.W. Camp.  This section is about 25 km of fairly flat track (good for kids to ride on) interspersed with a few really steep, slippery, boggy pea gravel hills (good for sweating, grunting, falling over and finally dragging your bike up.)

Our choice of transport for this trip included the Big Dummy (a stretch framed bicycle ‘ute’ which Tom rode on his epic trip), a tandem (with the near seat post cut down to fit small legs) towing a BOB single wheeled trailer, a couple of standard 26” wheeled mountain- bikes, a 20” kids bike and, my favourite, a DIY trailer that Greg built from scrap metal and road verge recycling. 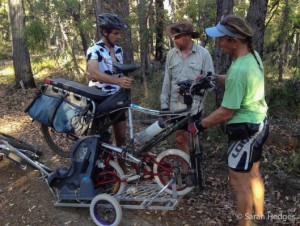 I was visiting Greg for my weekly dose of talking, tea drinking and tinkering with tools in the shed when he showed me the trailer he was planning to use for the trip. It was made out of scraps of aluminium, a couple of wheels from 20” kids bikes, a universal joint cut from an old socket extension and a couple of pre-loved baby car seats.  I was privately considered it highly unlikely that it would hold together for the trip.  I consoled myself with the fact that it would most likely fall to bits before we got 100 metres from the support vehicle so at least we wouldn’t get marooned in the middle of nowhere.  I had to bite my tongue when Greg assigned me the task of modifying his trailer to accommodate a bike as well as a baby seat.  His theory was that initially Molly could ride in the baby seat while her big sister Megs road alongside.  When Megs ran out of legs we could bolt her bike onto the trailer and then perch Megs on the top of her bike, perched on top of the trailer, behind Molly and towed behind Greg’s bike … before tearing off down another 25 kms of pea gravel and coffee rock.

Fearing the trailer was under engineered, I over engineered the bike bolting brackets and crossed my fingers.

The following weekend we all converted on the Jarrahdale Deli for a fix of caffeine and sugar before heading off –  looking something like the Wombles meets Tour De France .

By the time we got from the deli car park to the official start of the track Meg’s bike and Meg were riding high.  By the end of the first 2km Molly had moved to the BOB on the back of my tandem.  At about 3km Ben told me his legs were tired and he wanted a lift … which he also told me at the 4km, 5km, 6km and 7km mark and so on. . . . until I let him climb on the back of the tandem.

Shortly after that we met Demelza who had dropped the support vehicle to the half way spot and then ridden out to meet us.  By the time we got to the vehicle at the Belmoral camp all the kids had tried out of all the transport possibilities.

After smoko Demelza took the support vehicle with all of our food and sleeping bags to the Wungong Hut where we were spending the night.  With her went Britta, who had ridden the first half unassisted, and Molly who had been towed the whole way and was looking like a jelly baby that had been licked, dropped and then rolled in pindan. 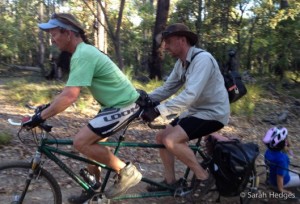 The rest of us headed off with full bellies and refilled water bottles.  We managed all of 2km when Tom got his second flat for the day, one of those ugly unfixable buggers where the valve had torn away from the tube.  He installed his second spare tube which lasted a couple of kms until it suffered the same fate.  He scrounged another spare tube …….. and another…..and another … This last tube lasted all of 10 meters. Amazingly enough Tom kept his cool through this whole process patiently replacing tube after tube.

When every spare tube in the convoy had been tried and found wanting Greg’s DIY trailer really came into its own.  With a bit of reshuffling we managed to fit the spare people into the spare spots and strapped Tom’s Big Dummy on top of Meg’s little bike on top of the trailer which was still going strong.  Meanwhile, Tom, 6’ 2” was perched on the back of the tandem on a seat cut down to fit a 6 year old.

In case the irony of this particular piggy backing is lost on anyone, remember that this is the bike Tom rode hard and heavy for 2 years and 28,000kms without any serious ‘mechanicals.’

By the time we reached the hut the sun was just setting. Amazingly the only real dummy spit for the day had been Molly who cried because she wanted to go for another ride in the dark.

Not bad for a ride entailing a 38C day, 5 adults, 5 kids (one as yet unborn), 8 bikes, 2 trailers and innumerable flat tyres.

We had managed to pick a fairly hot day and due to unforeseen circumstances we hadn’t got underway until about 1.30pm.  We were all pretty keen to get an early start on Sunday so we were all fed and in bed by about 8.30pm. My favourite part of the evening was telling the kids a bedtime story. It was meant to lull them to sleep but I’m not sure who was snoring first, the kids, me, pregnant Sarah or the irrepressible bicycle boys, Greg and Tom. 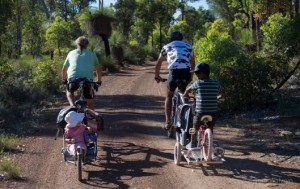 The ride back was comparatively uneventful.  Tom pinched the front wheel off Demelza’s bike which meant he only had rear brakes – less than ideal on slippery downhills, but no problem for a man of Tom’s experience.  Britta managed to fall off her bike in exactly the same spot her dad had come unstuck twelve months earlier, but without the injuries her dad collected, and Ben ‘rode’ the whole way on the back of the tandem.  With the cooler start to the day and all the technical problems sorted out on the previous day, we were back in Jarrahdale before lunch.