Lots of fives . . . and funnily enough this will be the fifth year I have participated in plastic free July . . . . but of course I am NO WHERE NEAR fifty years old!

First things I just had to be vigilant about. It wasn’t hard, I just needed to be conscious and say “no” – plastic shopping bags, take away coffee containers, water bottles, straw. . . .. Not much of a change really – just awareness . . . and the occasional gumption to walk out a pub that only sells beer in plastic containers and refuse to fill my water bottle with wine!

Second, new habits I needed to adopt – buying in bulk – flour, peanut butter. Rice, lollies, chocolate, popcorn. Finding a butcher who would wrap meat in butchers’ paper only. Going to local farmers markets for organic fruit and vege. Taking a container and cutlery to the markets to avoid plastic takeaway containers. This will take you more time and organisation to start with, but less in the long run.

Third, there were things I had to find alternatives for or cut out of my life – I gave up on timtams, starburst lollies, store bought strawberries, balloons. 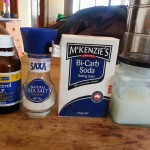 And fourth, (and most excitedly) new skills I had to learn, things I had to make – those little cloth bags you put your fruit and vege in, cloth sanitary pads, yogurt, toothpaste, deodorant, my own jam, canning fruit in season, making ice cream (yes I’m sorry all bulk icecream has some plastic packaging  – damn it!)

Some of these skills are old skills being revised (do you know anyone who makes their own sanitary pads?) and many of the people who know those skills are not here anymore . When it comes to these things all I can say is “thank goodess for google” The number of times I jumped on line to ask “is there a plastic free alternative to  . . . . “ The fact someone out there had thought of it and taken the time to add it to the net made me feel less alone in my quest.

One of the best exercises I have seen involved these four ways to reduce plastic. A teacher got her class to do a stock take of the plastic in their household pantry and fridge. Each child was then randomly given a “tricky” item to see if they could find an alternative. The creative ideas and research that came out of that assignment was incredible. 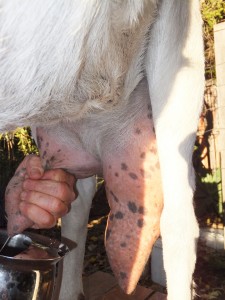 And fifth, some things I did were truly just radical and just strange. In my third year of Plastic Free July I could not source milk that was not in plastic so  – meet Kirsh. Kirsh had triplets last year and in the end she was producing nearly six litres of milk a day. I learnt to milk her, I learnt to make goat cheese (lots of goat cheese . . .).I trained a goat around the streets of South Freo without running away from dogs, I learnt how to wake up at exactly the same time each morning so the neighbours didn’t complain about her bellowing . . .

When I tell my plastic free story, most people say “good on you” but occasionally you do get someone who comments “What difference is this going to make really? This is nothing in the scheme of things” I usually tell them this story.

There is a girl in our street. She goes to a posh private school in Perth. After we screened the movie Bag It, she decided that she was going to refuse to buy bottled water again. She simply took a water bottle. When her school took the girls up to Karagini for a camp, she put on her permission form that she could not drink bottled water. She added it to the allergy part of the form, she added it to special requirements and she attached a letter explaining her stance.

It is a long way on a bus to Karagini. At the first stop the teachers got out the water and fruit for morning tea. “I can’t drink that Miss, but I have a water bottle I filled before I left home.” She is a good girl, but by lunch time her drink bottle was empty. She was offered water in a bottle. She refused. She got into trouble, but still she refused. Kids always love a rebellion and soon other girls started to join in. By the next town half the bus would not drink bottled water.

At the next town the teachers bought large esky water containers (remember them?) Despite the head teacher being really annoyed one teacher pulled her aside to tell her she was actually impressed.

The school has changed its water bottle policy. No bottled water will be taken on school camp. They go on 25 camps a year with an average of 30 girls, each one drinking 5 bottles of water a day. That’s 3,750 plastic water bottles. What was that about one person not making a difference? What if we add school carnivals? Cross country?

I always reply “By god your right! I suppose I am only thinking about reducing what I can avoid”

I am pretty proud of the plastic I have avoided in my life, but I have a dilemma bag too. The first year I participated in Plastic Free July we used to call this the shame bag, but the Earth Carer’s are right – there are some plastic that is a dilemma, not something to be ashamed of.

One – reticulation. Before I moved house recently I produced all of my own veggies in my garden (and yes I lived on a 200 square metre block in South Freo). I live in WA. On the coast. I need to get water to my plants. My garden is too big to water with a metal bucket. But my garden means my food miles are reduced to metres, I use no plastic packaging (even for strawberries) and I don’t have to worry about the organic certification of what I eat. 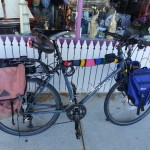 Two – my bike panniers. You have probably heard the concept of “built in obsolesce” – the deliberate design of products so they break and you have to go out and buy a new one. These paniers are the opposite – we call them a 007 product. My partner bought them from a local factory in North Fremantle 32 years ago. They have the name of the person who made them sewn into the label. And they have a spare plastic clip on the inside in case one breaks – look it is still there!

I bought my mum some brand new (expensive) panniers for her birthday. They looked cute compared to mine so I took them shopping. I broke the clip. I called the shop where I got them. They gave me the number of their supplier and I got put through to their in Sydney, then the distributor in the US, then the manufacturer in China – of course the clips are not available separately. . . .maybe I could just buy another panier . . . . . .

007 products are worth using plastic for.

Plus these panniers go on my bike – I don’t own a car. These paniers are my back seat. Better than a back seat since I can take them off and go into the shops with them .  .

Three – medical bits and pieces. There are some drugs I would be in serious trouble without, my partner’s father just had a triple bypass and I know that there are plastic bits in him that have saved his life, I just met a girl in a café with this crazy new “cast” for her broken tibia. That plastic contraption means that her recovery time will be halved. My partner and I have consciously chosen not to have children. I won’t go into how we managed that but . . . . I think these are good uses of fossil fuels.

Four – Potato chips. You weren’t expecting that one were you? This is one plastic vice I cannot break, and possibly the reason why I try so hard in the other areas. The brand and flavour varies, but I have not found one that is not packaged in plastic. And before you start – yes I can make kale chips at, eat celery (apparently it feels the same because it crunches?), and I know that Kakulas has bulk beetroot and pumpkin chips. I know, I know – but none of them are the same. Lying on the couch with a movie, slowing savouring each chip  . . .

This truly is a plastic item that should be in my shame file and I know it, it’s not a dilemna – Sorry!

And for those of you who are counting – yes that is only four. But let’s think about the characteristics of plastic – it is flexible, strong, weak, can be made into any shape imaginable. It is an incredible product, one of the ultimate human achievements. What else is like plastic?

To be vigilant, change habits, learn to live without some things, learn new skills and be slightly radical and strange– really all you need is your brain!