At 5.00 o’clock Sunday morning two weeks ago you would have found me fast asleep (probably snoring like a trooper) and dreaming pleasant dreams of urban self-sufficiency after a big Saturday in the garden topped off by a trip to Jarrahdale to pick up our two pet goats, Sunday and Kirsch.

Suddenly my peaceful slumber was shattered by a horrible scream that brought me bolt upright in bed. “What? Where? Is someone being murdered? Oh no!! There it is again! It’s coming from the goat pen. Someone must be attacking my goats!!” (Okay, maybe not the most natural conclusion, but the first one that sprung to my sleep addled brain.)

I stumbled out of bed and through the hole in the fence to my neighbour’s backyard to where our goats live. Expecting a life and death struggle between a goat and maybe a fox, or at the very least one of the goats with its head somehow tangled in the fence wires I was surprised to see Sunday peeking bleary eyed out of her shelter and Kirsch standing in the middle of the pen, hale and hearty, as she drew breath and let rip with another ear piercing (drums that is, not lobes) scream. After a quick assessment whereby I realised there was nothing life-threateningly wrong with the girls ( ie they were intact and had food, water and shelter) my anxiety about our lovely four-legged family turned into an even greater anxiety about how my long suffering neighbours would be reacting to this 5.00 o’clock goaty serenade.

Trying to live as an urban peasant on a tiny 213m2 block means that our gardens, bikes, compost, bees and livestock tend to be constantly sneaking into any under-utilised public spaces. Any food scraps or building materials that are left lying around usually get appropriated and it’s not uncommon for a group of kids to come knocking on your door looking for empty jam jars or egg cartons. All this calls for pretty open-minded and tolerant neighbours. . . . 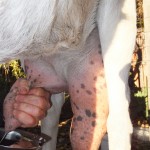 So as Kirsch sucked in another gargantuan breath, I looked desperately for a way to stop whatever was causing her to make this most unneighbourly noise.  I noticed that her udders were huge and swollen and it was then that in spite a premature and shocking start to the day my brain started to make sense of the situation.

Kirsch and Sunday had spent the previous week staying with our friend Keren, who has  a goat minding facility. While Kirsch and Sunday were with Keren she had found new homes for Kirsch’s month-old triplets (Red, Yellow and Blue Boy). Although we had been milking Kirsh a bit over the last month she was obviously used to the kids taking most of the milk and, without them, she was bursting at the seams, a sort of mammary expanding empty nest syndrome.

Quick as a bleary-eyed, sleep befuddled flash, I whipped out the milking gear and started milking her. To my enormous relief that seemed to provide Kirsch with the sort of relief she needed. As her frothing milk poured into the stainless steel jug, she stood quietly on the milking stand munching on muesli , using her mouth for its gastronomic rather than operatic purpose.

The relief was short-lived, however, as it quickly became apparent that the two litre stainless steel jug we customarily used for milking was no longer up to the task. Without her kids feeding, Kirsch was a veritable river of milk. As I rushed inside to get another container she let out a series of bellows (how could so much milk and so much noise come from such a small goat?) which continued until I was back milking her and started up again as soon as her udder was empty. Not knowing what to do and fearing any minute some enraged neighbour would come bounding over the fence armed with a roll of goat gagging gaffa tape, I opened their gate. In a flailing of floppy udders she charged out of the pen and up the road with me stumbling after her. 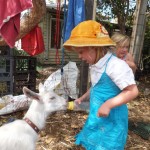 When I finally caught up with her she was standing in the middle of a ‘paddock’ (a scrubby block of unused land at the end of our street) moaning and bleating. It took me an hour to calm her down and lead her home again. After scrambling through all of my goat books and trawling the net, I realised she was, of course, pining for her kids and the consensus of opinion seemed to be that she would come to grips with the loss and settle down in a day or so (a bit longer than it took my mum to stop pining when I left home.)

In a rural setting a few days of screaming goats would be fine. You just turn up your radio or put in your earplugs. Not so easy in suburban South Fremantle.

I went to bed early that night after setting the alarm for 5am. After a restless night tossing and turning I am pretty sure the alarm and the goat went off at exactly the same moment. With a sense of déjà vu I jumped out of bed and pulled six litres of milk from a screaming goat and then followed her down to the ‘paddock’ where I tried to calm her jangled nerves (and mine) before coaxing her back home. I couldn’t keep this up. Something had to be done. Then as I was filing up the goats drinking trough, an inspiration struck me….. Goats hate to get wet.

Next morning as soon as the first decibels of goat chorus hit my ears I jumped up, ran into the chook pen where the hose was and gave Kirsch a short sharp squirt. Then I ducked down into the chook pen. Immediate silence resulted. After a few quiet moments,  Kirsch gave another, slightly more tentative bleat so I bobbed up and squirted her again. After a few minutes quiet I figured I had found the perfect solution to noisy goats and crawled back into bed.

About five minutes later she started bleating again but this time the instant as I made a move for the hose she stopped her goat shout and stood looking forlornly at me. I reasoned that squirting her when she was quiet would only be counter-productive and definitely send a mixed message so I figured I may as well get back under the covers. As soon as I headed back to bed she would start again only to stop as soon as I made a move on the hose. Not to be outsmarted by a goat, I pretended to go back to bed but actually ducked down behind the fence and quietly snuck into the chook pen without her seeing me. Just to make sure she hadn’t realised I was there I peeked through a nail hole in the fence.

Now I know my little domestic goat is quite a few generations removed from her wild relatives but obviously her sense of smell and hearing survived her domestication.

Picture this if you will. On one side of the fence there’s me… stark naked, half awake, crouching in a pile of chook shit and cabbage leaves. On the other side…. one damp but defiant goat staring straight back at me, nostrils flaring and her ears like a couple of sonar receptors knowing exactly where I am and exactly what I’m planning.

They say a good relationship requires give and take. After two weeks of negotiation Kirsch and I have come to an arrangement. She gives me some time to sleep in in the morning and I take her for a walk up to the paddock in the afternoons. I give her plenty of goat muesli and branches and she gives away 5 litres of milk every day. She gives me access to her udders and I take good care of her. I don’t kid myself about where the power lies in this relationship. Goats have an acute smell, excellent hearing and when moved to it uses it, an incredibly loud voice. I on the other hand only possess opposing thumbs that allows me to hold a hose and turn on a tape.

And in terms of intelligence? Well, never take a knife to a gun fight.