Son of Norman – By Tim 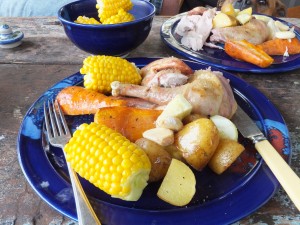 Having Norman Over for Dinner

For an aspiring urban peasant, the chicken – nature’s ultimate permaculturist – is a must‑have item.  You can fit a chook or two in almost any back yard, they eat your scraps and weeds, and in return give you; eggs, manure, pest eradication, companionship and perhaps best of all their gentle clucking voices give a soothing country ambience to urban environments.

When it comes to procuring these amazingly versatile feathered friends there are lots of options. You can buy 16 week old chooks ready to lay or get cute fluffy day old chicks and raise them to maturity.  For the more poultry‑savvy you can even get hold of some fertilized eggs and hatch them out by putting them under a broody bantam or electric incubator.  It’s a wonderful thing to watch the soft fluff balls of life emerge from a rock-like shell and then follow their growth through to maturity where they start to lay their own eggs and complete the cycle.

The downside to day olds and fertilized eggs is that you’re not 100% sure what you’re really buying, a bit like buying your undies on line.  You know you’re getting some sort of poultry (unless someone’s slipped an alligator egg in with your hi‑lines) but the adventure of chicken-raising always entails some uncertainty of outcome.

Take gender, for instance.  If you start with a dozen eggs the odds are you are getting to end up with at least some roosters and, of course, in the early stages boys and girls look pretty much the same.  Sometimes it’s not until you’ve been woken up early one morning by an adolescently screeching crow that you realise Henrietta is actually Henry or Winifred is actually Winston and by then no amount of loving attention is ever going to get him to lay eggs or stop crowing.  Some of our neighbours recently acquired eleven eggs of which nine turned out to be boys.

As I said it’s an adventure.

In suburban chook yards (unlike a certain large and rapidly expanding Asian country) being born male is not looked upon with joy and excitement.  Apart from the obvious issue of low egg production (and I mean really low) roosters are cursed with the anti‑social propensity for crowing earlier in the morning than most urban dwellers want to wake up.  So unless you live on the very outskirts of town, being born a male chicken generally calls for drastic action. Since it’s the rooster’s head that does the crowing, a common solution is to remove the problematic area (ie circumcision of the head). For many urban peasants the bonding that they undergo during the process of raising their birds means they don’t feel too good about this rooster quieting activity.

Enter Shani, Tim and the South Fremantle Rooster Euthanasia Program (SFREP for short).  We have found there’s a huge demand for our services.  Basically, if you have a noisy rooster that’s surplus to requirements you can bring it around to our place and we will assist it in its movement up the food chain (usually in the form of soup).  Quite often these days I get home to find a rooster or two in a milk crate on the front verandah (with or without explanatory note attached )and consequently we seldom need to buy meat.

About a year ago a cargo of roosters arrived just as we were heading out for dinner.  We underestimated the roosters’ passion for freedom and by the time we got home they had escaped and were running all over our yard.  They were rounded up and shortly thereafter moved up the food chain…… all except one. The next morning we could hear a rooster crowing somewhere down the street.  It turned out that one of the freedom‑hungry roosters had made it down the road to the chicken pen of one of one of our neighbours, Philippe.  Someone had seen the rooster next to Philippe’s chicken pen and, assuming it had escaped, had put it in the pen with the hens.  By the time we discovered where the rooster was and how it had come to be there, the rooster had been named Norman and made itself right at home strutting around amongst Philippe’s formerly male‑free chook house.

There is a theory (not endorsed by the SFREP) that once a chicken (or rooster) is given a name you’re obliged to leave its head in place no matter how much noise it makes.  In Norman’s case he was a small young rooster and had a relatively low level crow so the neighbours decided that on balance the country farmyard vibe that he provided outweighed the slight noise nuisance which accompanied it.

Unfortunately, Stormin’ Norman’s morning vocal exercises increased in proportion to his increasing size and at the end of eighteen months we invited the neighbours over to share some chicken stew and the street fell silent once again.

Of course, Norman hadn’t directed all of his male energy into crowing and it wasn’t long after we’d had Norman for dinner that his echo returned (like the 17th remake of Sylvester Stallone movie).

Yes, Son of Norman was soon making his presence felt (or at least heard).  Like Norman he started off with a relatively subdued crow and it wasn’t until Norman’s grandson started to join in that Philippe asked the SFREP to intervene.  I got the message that Phillipe wanted his roosters quietened down (with extreme prejudice) second hand via my partner, Shani.  She told me that Phillipe would be bringing them over but it had to be during the evening after the chooks had gone to sleep.  Knowing that Phillipe was an absolutely exceptional chef, I assume that he wanted to have his roosters dispatched after they had gone to sleep to somehow enhance the taste of their meat.  Maybe rooster stew is particularly tender if the roosters are killed while they are asleep before their adrenalin kicks in.

Early evening is actually an awkward time for me as I’m usually walking my goats or watering the vegies, cooking dinner or engaged with some other pressing responsibility.  Consequently, I didn’t get around to Norman the 2nd and 3rd for some time.  One lunch time I dropped around to Philippe’s and offered my services, but he declined saying it had to be after sunset.  This got me thinking.  Maybe he didn’t want his daughter to know the progeny of Norman were going under the chop.  Or was Phillipe into a bit of voodoo on the side?  Maybe it was some kind of sinister ritual?

As Christmas approached I got a cryptic email from Phillipe asking if we were “having chicken for dinner any time soon”.  I headed over to finally organise a time with him.  Just as I was leaving Shani remembered Phillipe was a Steiner parent.  Maybe according to Steiner, roosters must be killed on sunset so their spirits could follow the sun or some such.  When I arrived at Phillipe’s door I had to ask.

“Okay, Philippe, what is it with roosters and sunset?  Is it a Steiner thing? Voo-doo? What’s going on?”

Phillipe looked at me quizzically for a minute and then burst out laughing (a volume of noise not dissimilar to Norman’s).

“Actually, no, it’s just that the sneaky buggers move so quickly I can only catch them once they have fallen asleep.”